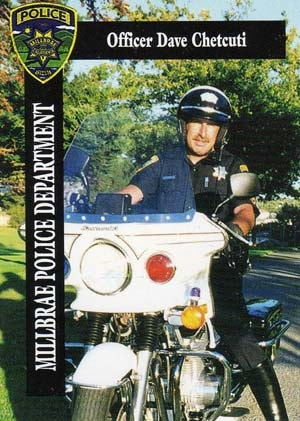 Officer Dave Chetcuti
A BRIEF HISTORY OF OUR TEAM
​
​On April 25, 1998 Patrolman David Chetcuti put on his uniform and boots and reported for duty. Little did he know, that day would be his last. He was shot and killed after responding to backup another officer from a neighboring agency who was being shot at. A San Bruno police officer had stopped the suspect for not having current registration. As the officer approached the suspect's car, the suspect produced a high powered rifle and opened fire.
​
The officer was able to escape injury by diving into a drainage ditch for cover and calling for help. Patrolman Chetcuti, a motorcycle officer, was the first responding officer on scene. As he pulled up the suspect opened fire on him, striking him several times in the head and chest. The suspect then stole his weapon and fled the scene. A short chase ended until the suspect stopped and exited the vehicle with hands in the air.

Patrolman Chetcuti had served with the Millbrae Police Department for 11 years.
Understandably this incident had a profound effect on the San Mateo County community and all of it's first responders. It was from this tragic incident that the San Mateo County Critical Incident Stress Management team was established.

Prior to this incident, each individual agency held its own responsibility for the support of their members post traumatic incidents or through the normal trials and tribulations of life. Some agencies had elaborately established processes and support mechanisms while others were lacking.

With the passing of Officer Chetcuti, it was recognized that our personal struggles and our responses to tragic incidents transcend the badge, patch or uniform we wear. While fundamentally our roles and responsibilities may be different when we lace up our boots, put on our uniforms and report for duty; underneath the bravado, brass, and misconceived veil of invincibility; we are all human beings, each as vulnerable as the next.

The creation of a county support team which ignored the boundaries of employer or position and acknowledged the concept of the first responder family recognized this truth. We are the same. We are a family of brothers and sisters regardless if we wear turn outs, uniforms or scrubs. We are the ones that the community turns to in the time of need and it is imperative that we are able to turn to each other when we are in need.

This is the concept behind the San Mateo County Critical Incident Stress Management Team and the driving force of the team's operation since 1998.

Today the team is comprised of members spanning across law enforcement, fire, EMS, dispatch, mental health and hospital personnel, both active and retired. The team responds to individual requests for support as well as support to incidents involving the first responder family of San Mateo County.